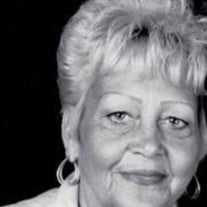 Glenda Ann Smith nee Bennett (Whitfield), 74, of Jacksonville, FL was called to be with her Lord on Tuesday, September 15, 2020. Ann was born on June 4th, 1946 in Erwin, Tennessee. She grew up on Rock Creek Road in Erwin and attended public school there until the 6th grade. She graduated from Jacksonville’s Regency Beauty Institute in the early 1980’s and then opened up her own hair salon “The New Image” off of Bowden Rd on Jacksonville’s Southside. In her free time Ann loved to bowl, cook, play bingo at the Arlington Lion’s Club, and make ceramics. She spent her time traveling across the country with her bowling team and visiting Biloxi with her pack of rambunctious gals. Her favorite pastime was cruising the seas with her spouses, friends, and family. After the closing of her hair salon she continued her business out of her kitchen. Every day there was always someone gossiping from the counter, as she pulled her blow-drying chair out from the back room. She was the glue that held the community together. Everyone always wanted to come have some of Nanny’s southern home-cooking, and if you walked into her house you knew she’d be listening to the Food Network. She returned to Tennessee later in life, living in Unicoi to be closer to her beloved brother Earl Bennett, eldest daughter, and grandchildren; spending 7 years back in her hometown. In 2011, she returned to Jacksonville joining Friendship Community Church in Arlington. This last season of her life was filled with memories of her church community, loving friendships, and time spent with her youngest daughter and grandchild. She was preceded in death by her parents, Rotha and Eva Johnson Bennett; her siblings, Howard Bennett, Betty Jean Bennett, Dorothy Bennett, and Earl Bennett; her late husbands, Richard Lamar Whitfield and Kenneth Ray Smith. She is survived by her two daughters; Tamila Mae Stone (Raymond) of Unicoi, Brandy Delane Davis (Brandy) of Jacksonville, two step-daughters; Jennifer Bachman and Beth Colson, three grandchildren; Ashley Danielle Shaw, Amanda Dawn Denton (Nathan), and Daysia Dawnyelle Davis, along with numerous step-grandchildren and great grandchildren. The celebration of Glenda Ann Smith’s Life will take place Monday, September 21st at 11AM at Friendship Community Church, 1410 Tutter St. in Jacksonville, FL (32211).

Glenda Ann Smith nee Bennett (Whitfield), 74, of Jacksonville, FL was called to be with her Lord on Tuesday, September 15, 2020. Ann was born on June 4th, 1946 in Erwin, Tennessee. She grew up on Rock Creek Road in Erwin and attended public... View Obituary & Service Information

The family of Glenda Ann Smith created this Life Tributes page to make it easy to share your memories.

Send flowers to the Smith family.