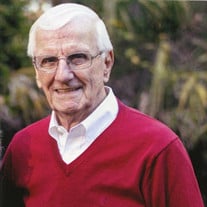 ANDERSON-Gene Maurice Anderson, 89, passed away Saturday, May 8, 2021. He was born January 12, 1932 to Gene Maurice Anderson and Wena Rademaker Anderson in Marinatte, Wisconsin. Gene attended Augsburg College in Minneapolis. He was a Veteran of the Korean Conflict having served our Country for 9 years in the U.S. Air Force as an Air Traffic Controller. After Korea he retired in 1987 with the Federal Aviation Administration from Jacksonville International Airport Control Tower after 21 years of service. Following his retirement as an Air Traffic Controller, Gene spent 10 years in the Recreational Vehicle Industry in several positions of sales, Sales manager and Service manager. He was preceded in death by his Son, Russell Lee Anderson and a Brother, Lynn Anderson. Gene is survived by a Sister, Eunice Hurt (her Son, Jon), Sister, Betsy Marquart (Jim) and (their Sons, Rob Marquart and Daryl Marquart); his Sister-in-Law, Susan Anderson and (her Sons, Adam (Andrea) and (their Children), Kevin (Sarah) and (their Children); Cousin, Wendell Anderson (Sharon) and a close Family Friend, Edie Long. Gene also leaves behind his Wife, Ingrid E. Anderson; Step-Son, Joel Smith; Step-Daughter, Diane Smith; 5 Grandchildren and 5 Great-Grandchildren. He was a man who loved the Lord, his Family and his Country; a man of Integrity and Honesty. Funeral services will be held on Tuesday, May 18, 2021 at 11 am in the Chapel of Corey-Kerlin Funeral Home, 940 Cesery Blvd., Jacksonville, FL 32211 with Senior Pastor Gary Lee Webber of Southside Baptist Church officiating. Interment with Military Honors by the U.S Air Force will follow at Jacksonville National Cemetery at 1 p.m. The Family will receive Friends one hour prior to the Services at the Funeral Home. In lieu of flowers please make memorial donations in Gene's name to Southside Baptist Church or a charity of your choice.

ANDERSON-Gene Maurice Anderson, 89, passed away Saturday, May 8, 2021. He was born January 12, 1932 to Gene Maurice Anderson and Wena Rademaker Anderson in Marinatte, Wisconsin. Gene attended Augsburg College in Minneapolis. He was a Veteran... View Obituary & Service Information

The family of Gene Maurice Anderson created this Life Tributes page to make it easy to share your memories.

Send flowers to the Anderson family.