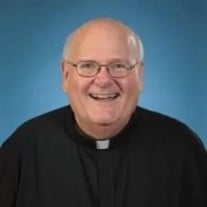 Father Frederick R. Parke (73), or “Father Fred” as he was known to his parishioners, passed from this life to the next on October 18, 2021. A Catholic priest for 46 years, he loved being a parish priest. So many will long remember his pastoral care for them. He loved his parishioners and strove to help them to become who God created them to be. He had a great love for the Catholic priesthood and was known for nurturing vocations to the priesthood. Over a recent five-year period, four men from his parish were ordained to the priesthood for the Diocese of St. Augustine. He cultivated priestly fraternity with the priests with whom he served. And he was very happy to see the accomplishments of those priests with whom he served and those ordained from his parish. He had a special place in his heart for the Servant Sisters of the Home of the Mother. He brought them to Assumption parish, and their success in serving at Assumption parish and other places throughout the diocese gave him great joy. Most especially, he had a love for the Eucharist. He initiated Perpetual Adoration of the Eucharist at Assumption. The success of that parish with its many vocations was something that he attributed to the graces of Perpetual Adoration. His humility regarding such success was typical. He always credited any success he had to God and the intercession of the Blessed Mother. Father Fred was born in Binghamton, NY to Foster and Helen Parke. He attended Catholic grade school at Saint John the Evangelist in Binghamton and Binghamton Catholic Central High School. He graduated from the University of Tennessee with a Bachelor of Science in Education. He would tell many stories, almost always with great humor, of his days at Saint Bernard’s Seminary in Rochester, NY. Typical subjects would include his writing, academic experience, and the visits by Bishop Fulton Sheen to the seminary. He was ordained a priest for the Diocese of Syracuse and served in three assignments there: Blessed Sacrament, Saint Joseph the Worker, and Saint Michael’s/Saint Peter’s. To be closer to his parents, he moved to the Diocese of Saint Augustine where his first assignment was at Saint Joseph Church, Jacksonville. In 1991, he was appointed pastor of Saint Elizabeth Ann Seton in Palm Coast, FL. He served 11 years during a period of great growth in the parish. He was appointed pastor of Assumption in Jacksonville in 2002 and served there until retiring in 2019. Father Fred would say that, when he was young, he thought that he might want to be an architect, a writer, or a priest. In the end, he said he got to do all three. At Saint Elizabeth Ann Seton and at Assumption, he oversaw multiple building projects. He built the church, school, columbarium, and extensions to the rectory office in Palm Coast. At Assumption, he built the gymnasium, Early Childhood Learning Center, and the Eucharistic Adoration Chapel. He also did extensive renovations to the church at Assumption. His humor will always be remembered. His seminary classmates saw it during his time with them. His parishioners saw it every week in the bulletin. Readers of St. Augustine Catholic saw it in his column, Rectory Ramblings, which he wrote for a short period of time. He even built a following on social media after retirement, and they grew in appreciation of his sense of humor. But, most significantly, he was a priest who strove to cooperate with the grace of Jesus Christ in pursuing holiness while demonstrating Christian joy. He follows his parents and his older brother Joseph in passing from this life. In lieu of flowers, consider making a contribution to the Servant Sisters of the Home of the Mother. There will be a Visitation for Fr. Fred on Friday, November 5th from 5:30 pm - 7:30 pm with a Vigil Service at 6:30 followed with the Rosary at Assumption Catholic Church, 2403 Atlantic Blvd., A Funeral Mass will be on Saturday, November 6th at 11 a.m. at Assumption Catholic Church with Most Rev. Felipe J. Estevez, Bishop of St. Augustine as Celebrant. Interment will be at San Lorenzo Cemetery in St. Augustine at 3:00 pm.

Father Frederick R. Parke (73), or &#8220;Father Fred&#8221; as he was known to his parishioners, passed from this life to the next on October 18, 2021. A Catholic priest for 46 years, he loved being a parish priest. So many will long remember... View Obituary & Service Information

The family of Fr. Frederick "Fred" Parke created this Life Tributes page to make it easy to share your memories.

Send flowers to the Parke family.