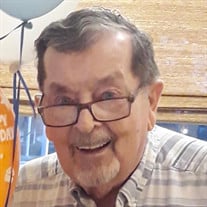 On Saturday, September 5, 2020 our loving God called Edward “Ed” J. Donelan home. Ed was born in Boston Massachusetts on October 9, 1926, during the roaring 20’s and just before the Great Depression. He was one of nine siblings and the son of Michael J. Donelan and Margaret (Rush) of Galway, Ireland. Being the son of immigrants, Ed quickly learned the importance of hard work. He joined his father, Michael in the construction trade at a young age to help earn money for the family during the Depression. With great love and devotion for his family, Ed always kept a watchful eye for the well-being of his siblings and extended family. He was well known for his kind heart and movie-star looks. Ed attended Commercial High School in Boston, Massachusetts where he was co-captain of the football team. The love of sports and football carried throughout his life. For many years, Ed was an avid skier and golfer. At the age of 18, Ed joined the United States Navy, construction battalion (Seabees) and spent time deployed to Okinawa Japan. After returning from the Navy, Ed worked in the construction industry in Boston until his retirement at age 60. In 1973, he married Phyllis (Burns) Donelan and helped raise their son, David. At the age of 61, Ed and Phyllis moved to Clearwater Florida where they lived for another 30 years. Ed is predeceased by his loving wife, Phyllis; son, David siblings John, Anna, Catherine, Ellen, Peggy, Roger and Ruth. His youngest sister, Gladys currently lives in Lowell Massachusetts. Ed has many remaining nieces and nephews that always thought of him more than an uncle. He will be fondly remembered by all as a loving influence in the family. For the past four years, Ed lived in Jacksonville, Florida. He leaves behind many close friends from Sunrise Assisted Living. A special thanks to Community Hospice and those who cared for and provided friendship to Ed during these last few years.

The family of Edward "Ed" J. Donelan created this Life Tributes page to make it easy to share your memories.

Send flowers to the Donelan family.