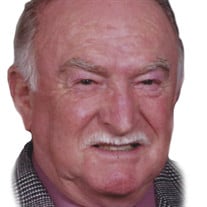 Edward Dorrell, resident of Jacksonville, Florida , passed peacefully into the arms of his Savior on April 25, 2021 after battling with health problems for the last two years. Born in Scranton, Pennsylvania on September 19, 1930, he was one of four children of John and Alice Dorrell, who had both immigrated to the United States from England. When jobs became scarce, the family moved to the Bronx, New York Where Edward attended school and graduated in 1948 from Bronx Vocational High School with a degree in wood working. He was a lifelong learner and a strong interest in history. He continued reading the newspaper daily all his life. Known as “Red” to his friends , he always had a quick wit and was known to be a jokester. Edward and Mary were married on October 19, 1950 after a two year engagement. After seeing her at her best friend’s house he proclaimed that she was “The one.” They stood by each other through thick and thin for 70 years. Ed enlisted in the Air Force in November of 1950 and was honorably discharged in November of 1953. Moving to Jacksonville, FL in 1958, Edward was the owner and operator Of Dorrell’s Appliance Service which he continued to manage until the last few weeks of his life. His accomplishments include being a race care owner/driver From 1967-1975, a pilot and Maintenance officer of the Jacksonville Flying club, fisherman, hunter , member of the Valiant Air Command for over 12 years. But he will be best remembered as a good husband, provider and protector of Mary. He is survived by his loving wife Mary Ann Dorrell. Son Steven W. Dorrell and daughter in law Pamela Dorrell, Daughter Susan Gibson and son in law Richard Gibson. Grandchildren Lacole Rudin, Mark Harvey and Kyle Dorrell. Great grandchildren Everly Ann Dorrell and Brantley and Parker Rudin. Also numerous cousins, nieces and nephews. The Family is so very appreciative to the outpouring of love and prayers from family, friends and church family. He was preceded in death by his parent John and Alice Dorrell, his brothers Pearson Dorrell and John”Jack” Dorrell and his sister Elizabeth Dorrell Davis. A Celebration of Life will be held at Destination Church, 7341 Atlantic Blvd. Jacksonville, FL 32211 on June 3, 2021 at 11 am . Followed by the Final Committal Service and military Honors at 1 pm at the National Cemetery , 4083 Lannie Rd. Jacksonville, FL 32218

Edward Dorrell, resident of Jacksonville, Florida , passed peacefully into the arms of his Savior on April 25, 2021 after battling with health problems for the last two years. Born in Scranton, Pennsylvania on September 19, 1930, he was one... View Obituary & Service Information

The family of Edward Dorrell created this Life Tributes page to make it easy to share your memories.

Send flowers to the Dorrell family.