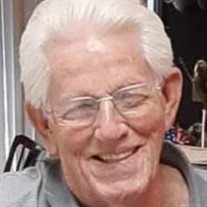 Edward E. Crosby Born June 30, 1938 and after a brief illness he was called home on February 15, 2021 to be with his Father: Robert Lester Crosby, Mother: Hester Savilla Crosby along with his Daughter: Kathy M. Crosby Myers as well as Brothers: Joseph L and Ronnie M Crosby including Sisters: Juanita Weir, Annette Sykes and Lillian Thrift. He is survived by his wife of 61 years, Edna L. (Palmer) Crosby, Children: Donald E. Crosby (Tiffany Pate Crosby), Wayne Crosby (Jeffrey Turner), and Terrie Adams, Grandchildren: Kevin M. Hatfield (Candice) and Kaleb A. Myers (Kristin Epps), Kayla M Rubright, Donald E. Crosby Jr, Desiree Pate, Summer Chastaine (Joseph), Christian Leslie, Loren E (Karissa), Eva M. and Erin E. Crosby, Derek S., Kylie N. and Chad M. Turner, Great-grandchildren: Elijah and Ronnie Hatfield, Kingston Myers, Christopher Rubright Jr., Elijah Pate, August Menen, Evelynn Crosby, Jonathan Jackson and Lukas. Edward is also survived by three sisters, Marie Andersen (Earl), Billie Cornelius (Donald) and Carol Payne (Donald). Along with many “adopted” children who called him Dad or Papa. Mr. Crosby left the US Army in 1963 and was a Foreman/Carpenter at Tom Trout Inc. for 42 years until his retirement in 2010. Edward had many passions in his spare time. One being the love of Bluegrass Music. Playing rhythm guitar with an abundant amount of Bluegrass friends. He truly enjoyed traveling to various Festivals within the Southeast. Two yearly Bluegrass events held a special place in his heart that he very much looked forward to attending. The “Rowdy” Wright Brothers in Brooklet, Ga. along with The Fiddlers Convention held in Galax, Va. Throughout the years many folks would also gather at the family home on Jefferson Avenue to pick music, play poker and have a good time on the carport. He also had a passion to be on the St. Johns River fishing whenever he could. It made him happy teaching the children and grandchildren where the “honey holes” were as well as the craft of fishing. No services are being held as Mr. Crosby’s wishes were to be cremated and a Celebration of Life along with a picking and poker party held in his memory on March 6th 2021 at his residence. His ashes will remain with “his Doll” Edna, until her passing then the two will be buried together in the family gravesite in Patterson, Ga.

Edward E. Crosby Born June 30, 1938 and after a brief illness he was called home on February 15, 2021 to be with his Father: Robert Lester Crosby, Mother: Hester Savilla Crosby along with his Daughter: Kathy M. Crosby Myers as well... View Obituary & Service Information

The family of Edward E. Crosby created this Life Tributes page to make it easy to share your memories.

Send flowers to the Crosby family.