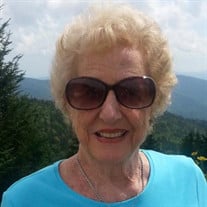 GRUNTHAL - Doris Anne Barwald Grunthal (Dolly) passed away peacefully at her home on January 11, 2021. Born on April 28, 1926 in Jacksonville, FL, she was the daughter of Mont and Doris Barwald. Dolly married Leonard H. Grunthal, Jr., the absolute love of her life, on June 15, 1950. After a residency in New Orleans, they moved back to Jacksonville and later to Atlantic Beach. Dolly was preceded in death by Leonard, her brother Billy and his wife Peggy, half-brother and half-sister Pat Frank and Peggy Frank, her closest friend and sister-in-law Anne Hofheimer, and Anne’s husband Norman. Dolly is survived by her children: Kathy Sullivan, Lisa Rose, Buzzy Grunthal (Alison) and Monty Grunthal (Melissa); grandchildren: Staci (Eric), Stephanie (Alex), Rebecca (Mike), Kati (Dave) Jordan, Haley, Hannah and Mont; and eight great grandchildren: Harrison, Luna, Miles, Elle, Kai, Lily, Micah, and Piper; nieces and nephews: Julie Hofheimer (the late Dan Tweed), Andy Hofheimer (Marianne), Gary Hofheimer (Bili), Faye Wilkes(Martin) and Bonnie Rose (Scott); and her life-long friends: Betty Lewis, Linda Wilkinson, and Betty Demetree. The highlight of Dolly’s life was her joy in her children, grandchildren, and great grandchildren, and that joy was obvious to all. She lived life to its fullest, always putting everyone else’s needs before her own. Her younger years were filled with family time and helping manage Leonard’s practice. Dolly was a lifelong member of Congregation Ahavath Chesed, and served on a number of boards including the Temple Sisterhood. Her contributions to the community also continued later as an active volunteer with Meals on Wheels and Baptist Cancer Center. Dolly’s passion was her family and friends. Other joys included being an avid Gator fan and attending games until she was ninety, playing bridge with her closest friends, and continuing to keep up every wonderful family tradition. She was a mentor, a friend, and a woman whose integrity and loving ways were admired by everyone she encountered. The family wishes to extend a special thank you to her caregiver, Marilyn DeFeo. Due to the coronavirus, a memorial celebration of life will be held at a later date. In lieu of flowers donations may be made to Feeding Northeast Florida, 1116 Edgewood Ave. N. D/E Jacksonville, FL 32254.

The family of Doris (Dolly) Anne Barwald Grunthal created this Life Tributes page to make it easy to share your memories.

Send flowers to the Grunthal family.