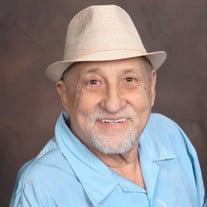 Dennis "Dino" Gene Crenshaw passed away on Monday, Aug. 9, 2021, in Jacksonville, Fla., at the age of 77. Dennis was born on December 14, 1943, in Texas. After attending high school at Andrew Jackson Senior High, Dennis served as a paratrooper in the 82nd Airborne and then in the Merchant Marine during the Vietnam War. Always filled with wanderlust, in 1970 he moved his wife, Betty Jean, and young son, Thomas Wayne, from Florida to Los Angeles, where a second son, William Allen was born. In 1981 Dennis moved the family again, this time to Anchorage, Alaska. It was here that he felt most at home, panning for gold or fishing for halibut, resulting in many tall tales about the fist-sized nugget that washed down the fast-moving river or the trophy-sized fish that got away. This was all part of Dennis’ good-natured, fun-loving attitude toward life and all its mysteries. One of the world's foremost authorities on the hollow-earth theory, Dennis was a frequent guest on podcasts and at events. He went on to author a book, The Secrets of Dellschau: The Sonora Aero Club and the Airships of the 1800s, A True Story, and was working on a new book at his time of death. Dennis was preceded in death by the mother of his children and his loving wife of 35 years, Betty Jean, who passed away in 1998, and step-father Allison Allen who passed away in 2013. Dennis leaves behind his wife Marsha; sons Thomas (Kristen) and William (Sheri); brother Marcus (Trâm); sister Lillian (Jody Sessions); mother Viola Allen and 5 grandchildren, 5 great-grandchildren and many other wonderful and loving friends and family. Mr. Crenshaw's memorial service will be held at 12 pm on Wednesday, Aug. 25, 2021, at Corey-Kerlin Funeral Home located at 1426 Rowe Avenue Jacksonville, FL 32208. In lieu of flowers the family requests memorials in Dennis’ honor to the charity of your choice.

Dennis "Dino" Gene Crenshaw passed away on Monday, Aug. 9, 2021, in Jacksonville, Fla., at the age of 77. Dennis was born on December 14, 1943, in Texas. After attending high school at Andrew Jackson Senior High, Dennis served as a paratrooper... View Obituary & Service Information

The family of Dennis "Dino" Gene Crenshaw created this Life Tributes page to make it easy to share your memories.

Send flowers to the Crenshaw family.