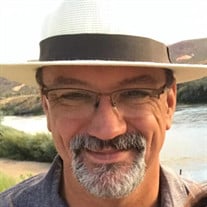 David “Scott” Morgan, age 52, of Jacksonville, Florida went to be with our heavenly Father on Tuesday, August 24, 2021. He was born October 7, 1968 in Sulphur La. He was the son of Alton E Sr. & Rose Helen (Pearson) Morgan. Scott married the love of his life Tammy on February 8, 1995. He was currently employed with the United States Postal Service. Scott graduated from Westlake high school in Louisiana. Following graduation Scott enlisted and proudly served in the United States Navy. He served on the USS Nimitz and USS Midway as an Aviation Technician (AT) and worked on P3’s. He was a Screwbird. He cross trained to become a Master at Arms (MA) and was stationed at Tinker Air Force Base, when he met Tammy. Scott followed his passion for Gunsmithing with a degree from Murray State College in Tishomingo. He then obtained his bachelor’s in Safety from Southeastern University in Durant. Scott worked at Dayton Tire in Oklahoma City before the plant closed and at Michelin in Ardmore. He was a conductor for BNSF and Stillwater Central. The job he loved, which he didn’t even consider it work was his gunsmith job at Jerry’s Gun Shop in Ardmore. Scott loved to talk about guns and could spend hours talking to people about them. Scott was a true family man! He was a very happy go lucky person. He believed if you didn’t have a smile, he would help you get one. He enjoyed, hunting, fishing and spending time with his wife, children and grandchildren. He was loved by all who knew him. Although we are all sad and heartbroken and will miss him dearly. We know by his strong Christian faith, God has sent an angel to take him to his Heavenly Home. He was preceded in death by his Parents Alton E Sr. & Rose Helen, and sister Jo Ann Rios. Those left to cherish his memory include: His wife Tammy, Jacksonville, Fl., Children Derrick (Ashlye) Morgan, Ardmore Oklahoma. Dakota Morgan, Durant Oklahoma. Grandsons, Kason Erekson and Konor Morgan. Siblings, Gene (Teresa) Morgan, Clarksville, AR. Bill (Janette) Morgan, Maryville, TN. Annette (Tommy) Clendennen, Westlake, La. In addition a large extended family. A Memorial Service will be September 13, 2021 at 11:00 am at Scott’s home church, Faith Southern Baptist Church of Dickson 7575 State Hwy 199 Ardmore, Oklahoma 73401. The U.S. Navy will perform military burial at sea.

The family of David "Scott" Morgan created this Life Tributes page to make it easy to share your memories.

Send flowers to the Morgan family.