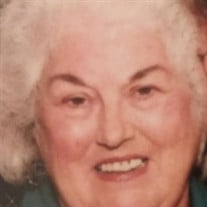 Claudia Jean Yaple 89 years young passed away on January 4, 2021 to be with her maker. Claudia was born in Ocilla Georgia on April 24. 1931. She was a wife, mother, grandmother, great grandmother. She is preceded in death by her husband Voy Onlee Yaple. She was also preceded by both her parents Willis and Kathleen Thomas and all her brothers, Theron Thomas, Willie Frank Thomas, Elmo Thomas, Lemar Thomas, and baby boy Thomas, and all of her sisters, Miriam (sister) Harper, Evelyn Fowler, Katie Obney, Beverly McCollum and Bobbie Kato. She is survived by all her children, Robert (Terry) Yaple, Mike Yaple, Jeff Yaple, Stacy Yaple, and Daryl Yaple, her granddaughter Angela Hughes and her great grandchildren Ariana Hutchens and Christopher Hutchens. She is also survived by countless nieces, nephews and friends and particularly her best friend of over 75 years Ruth Shantz. She married in 1947 to Voy and worked as a homemaker early in her life until 1970 when she began work at the United States Postal Service as a roving window clerk until she retired in 1992. Claudia meant so much to all who knew her. She could cook, budget for and feed a family of 7 and sometimes 8 depending on who she took in on any given day. Her home was a mecca for every kid in the neighborhood and all were welcomed. She often made jokes about installing a revolving door and a coin slot on the refrigerator. She could sew a dress in less than 10 hours and a suit by hand, she was also one heck of an artist and played piano and sang. She loved vacationing in the great smoky mountains and she could be found at other times on the beach. She loved going out dancing with her husband every chance they had and it was said, they could really cut a rug. She laughed constantly and would try to get a giggle out of anyone within earshot, she found humor in most everything and smiled more than she cried. She walked in a room and somehow the room was just a bit brighter. We all love her and will miss her dearly. The family will have a visitation on Monday, January 11, 2021 from 11 a.m. to 12 noon. A graveside service will follow at 1 p.m. at Arlington Park Cemetery.

Claudia Jean Yaple 89 years young passed away on January 4, 2021 to be with her maker. Claudia was born in Ocilla Georgia on April 24. 1931. She was a wife, mother, grandmother, great grandmother. She is preceded in death by her husband Voy... View Obituary & Service Information

The family of Claudia Jean Yaple created this Life Tributes page to make it easy to share your memories.

Send flowers to the Yaple family.