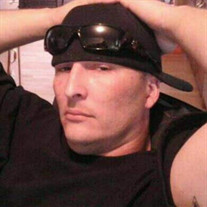 Not sure what to send?

Christopher Michael Hedrick born October 28, 1977 in Jacksonville, Florida passed away Monday June 6th, 2022. He was preceded in death by his father Bruce W. Hedrick and grandparents Richard Nobles and Leon and Hazel Hedrick. He is survived by his mother Debra Nobles Hedrick, children Amarissa Hedrick and Mason Murray,(mother of children Amy Crowder)…sister Krystle (Joe) Fooks, niece and nephew Savannah and Austin Fooks, aunt Vickie Colson, grandmother Mary Nobles, and numerous aunts, uncles and cousins. He graduated from First Coast High School in 1996 and went directly into the United States Marine Corp. for four years where he was stationed in San Diego, California working in Ordinance. At the end of his life Chris was enjoying spending time with his kids and was able to mend a few bridges. He left us too soon and just as he was getting to see a different side of life; a brighter side of life. He will be missed tremendously. Chris always had a smile on his face. He was funny, had a great sense of humor and was a man's man. He liked tools and tinkering with -- everything. He liked to build bicycles, and you never saw him without his hat on. He had a wild side but was infectiously nice. He had a multitude of friends from every walk of life. He liked all kinds of different genres of music, speakers with base that made the skin on your face visibly vibrate and hair fly wildly in the air, fast cars, guns, knives and pretty much anything dangerous. He was adventurous. He was the kind of uncle who would drop everything for his niece and nephew, even when called at 3am and was jokingly asked to borrow some duct tape and a sledgehammer the only question he asked was where to bring it to. He kept his parents on their toes with shenanigans like them waking up to hundreds of plastic pink flamingos positioned in their front yard. He was a reasonable man that usually had pretty good advice for anyone who would listen, and he would put himself in harm's way to protect the people, he cared for. So, if you never met Chris, you definitely missed out on something special. A Memorial service will be held on July 2nd at 1:00 PM at Garden City United Methodist Church on Dunn Ave.

Christopher Michael Hedrick born October 28, 1977 in Jacksonville, Florida passed away Monday June 6th, 2022. He was preceded in death by his father Bruce W. Hedrick and grandparents Richard Nobles and Leon and Hazel Hedrick. He is survived... View Obituary & Service Information

The family of Christopher Michael Hedrick created this Life Tributes page to make it easy to share your memories.