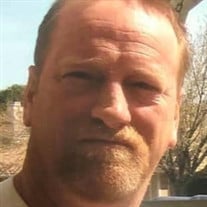 Carl "David" Chaires, 59 of Jacksonville, Fl went home to be with our Lord Sunday morning December 13, 2020. He had been suffering from diabetes since 2010. It was discovered when he had a massive heart attack in Atlanta, Ga exactly 10 years to the day, December 13, 2010. David was born November 18, 1961, in Jacksonville, Florida to Carl H Chaires, Jr & Nellie Sears Chaires, both deceased. David was a proud member of United Association of Sprinkler Fitters Local 821 of Florida. He began his career in 1990 and worked until his heart attack in 2010. His employment took him from Florida to California, Minnesota to Mississippi, and many stops in between. Everyone liked working with David, he was a hard worker that would keep everyone laughing at the same time. He had the gift of gab, never met a stranger, always had something positive to say. Anyone that knew him or worked with him has a David story. He had a wonderful laugh and would do anything for you. He loved traveling which took him away from his family and he wasn't able to spend as much time with his 2 older children, Ashley & Justin so he was trying to do a better job with Cheyanne. He loved her so much, sometimes he would get overwhelmed taking care of her fulltime, then she would put her two little hands on his face & look him right in the eye and say "Daddy I love you!" and everything was worth it. His two grandchildren Hayden and Athena meant the world to him. He and Hayden had a special bond. Then at 54, he was blessed with his daughter Cheyanne; he loved this little girl with all his heart. David was a Christian and had a personal relationship with Jesus Christ. He is survived by his children, Ashley Chaires Cohen (Markus) of Jacksonville, FL, Justin Carl Chaires (Jamie) Fernandina Beach, FL, and Cheyanne Chaires of Jacksonville, FL; grandchildren, Hayden Carl Chaires and Athena Chaires, both of Fernandina Beach, FL; siblings: Ann Chaires Cooper (Mike) of Jacksonville, FL, and Kenny Chaires (Kathy) of Las Vegas, NV; nieces and nephews, Lauren, Carly, Stephen, Rebecca, Jacob; 8 great-nieces and nephews and many, many, cousins that he was close to. The family will receive friends at the funeral home between 4 pm and 6 pm on Tuesday, December 22, 2020. Funeral services will be held at 11 a.m. Wednesday, December 23, 2020, in the funeral home chapel with Dr. Tim McDaniel officiating. Arrangements under the care of Corey-Kerlin Funeral Home, 1426 Rowe Ave. Jacksonville, FL 32208.

Carl "David" Chaires, 59 of Jacksonville, Fl went home to be with our Lord Sunday morning December 13, 2020. He had been suffering from diabetes since 2010. It was discovered when he had a massive heart attack in Atlanta, Ga exactly 10 years... View Obituary & Service Information

The family of Carl David Chaires created this Life Tributes page to make it easy to share your memories.

Carl &quot;David&quot; Chaires, 59 of Jacksonville, Fl went home to be...

Send flowers to the Chaires family.