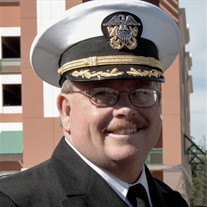 Captain David Branson Grimland, U.S. Navy Retired, born on 15 February 1956 in Temple, Texas to the late Ann and Charles Grimland, passed away peacefully, surrounded by family at age 64 on 12 January 2021 in Jacksonville, Florida. David was preceded in death by his wife, the love of his life and childhood sweetheart, Susan Grimland, and his brother Charles Grimland, Jr. He is survived by his daughter Jennifer and son-in-law Robert, and their two children Catherine and William; his son Zachary and daughter-in-law Tiffany and their two children Laila and Avery; his daughter Liza. He was also survived by his siblings Susann, Dan, and Mary Linda, and his beloved companion and canine-friend, Baby. In addition to having a beautiful family, David also had a long, successful, and respected military career. David attended Texas A&M University on a Naval Scholarship and graduated with a degree in Mechanical Engineering in 1978. He was an active member of the Texas A&M ROTC program. Immediately upon graduation, he began his service as an officer in the U.S. Navy. Following flight school, he spent ten years as an Aircraft Carrier Naval Flight Officer flying the S-3B Viking aircraft and becoming an expert in mine warfare and anti-submarine warfare. He swiftly moved through the ranks and achieved the rank of Commander in 1994. He actively participated in numerous combat operations, and was awarded the NATO Kosovo medal for his contribution to combat operations to secure Kosovo. In the year 2000, he was promoted to the rank of Captain (CAPT) and assigned to the Mine Warfare Command as a Requirements Officer. During this assignment he was the Program Manager for the design and construction of a High Speed Vessel (HSV-2 Swift) in Hobart, Tasmania. He was selected to attend the Naval War College in-residence program and earned a Master of Arts in National Security and Strategic Studies. Following this, he served as the Chief of Staff & Deputy Commander for the Chief of Naval Air Training, where he had the pleasure of serving as the U.S. Navy’s Blue Angels Chief of Staff. Finally, he served as the director of Cross-Warfare and International Programs at the Naval Air Warfare Center Training Systems Division, where he was a program manager for the development of Anti-Submarine Warfare trainers for air and surface platforms. He retired from the Navy in 2012 after 34 years of dedicated service. He was awarded several medals and ribbons during his military career, including two Legion of Merit medals and two Meritorious Service Medals. Following CAPT Grimland’s retirement, he worked for Logistic Services International (LSI), where he was promoted to the title of Director of Training Device Programs. He served as a program manager for the development of aircraft trainers for the Air Force, Army, Marine Corps, and numerous foreign militaries. David will be remembered by everyone who met him as a kind, funny, humble man with an innate leadership skill and a passion to help others reach their full potential. He was a lifelong learner, proud veteran, dedicated husband, loving father, and a friend to everyone he ever met. A graveside service will be held on Monday, 25 January, 2021 at 1400 at the Barrancas National Cemetery in Pensacola, Florida. In lieu of flowers, donations can be sent to the charity of your choice in David’s memory.

The family of Captain David Branson Grimland created this Life Tributes page to make it easy to share your memories.

Customized sympathy cards. Mailed for you.