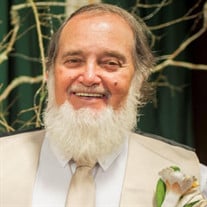 Bradwell Conn Simpson, born on September 7, 1944 of Raybon, GA passed away on November 9, 2021 at Memorial Hospital in Jacksonville, FL of natural causes at age 77 surrounded by his loving family. Brad graduated from Glynn Academy in Brunswick, GA in 1962. He went on to live in Fayetteville, GA until 1974. During this time, he worked as a meter reader and lineman for Georgia Power Company where he would eventually retire as a Division Manager after 42 years of employment. He moved to Kingsland, GA in 1976. While living in Kingsland, he met and married his second wife of 44 years, Corrie “Davette” Rominger. Together, they moved their four children to Raybon, GA in 1983. Brad was a member of Twin Rivers Baptist Church in Trudie, GA. He spent many years dedicating his time and efforts to the youth and young adults of his beloved church family. He also enjoyed hunting with his friends and children. Brad was a Fisherman. Born and raised on the coast of St. Simons Island, GA, he learned to gather oysters, cast for shrimp and fish from a very young age. He grew up in what is now called Glynn Haven on St. Simons Island, GA. His Grandmother and Grandfather, Joe Brown and Sally Bessie Smith owned a 14-acre farm and his mother, Mary Ann Simpson, worked at the General Store. He grew up with his brother and cousins, who were his favorite playmates. Brad was a jokester who loved to laugh and tell stories. He was especially knowledgeable about the Indigenous People of the Southeast. He loved to make bows by hand and enjoyed working with wood. He was a farmer, a historian, a leader, a teacher, an honest man who loved his family and God. Above all, he was a Patriarch and a gentleman as well as a true example of love and wisdom to his children, grandchildren and great-grandchildren. Brad is predeceased by his mother, Mary Ann Simpson and his son, Joe Brown (Dana) Simpson. His surviving family includes his wife, Corrie “Davette” Simpson, his children, Shane Christopher (Star - deceased) Simpson, John Malcolm (Donna) Simpson and Paige Elizabeth (Tracy) Monticone, his grandchildren Victoria Anne (Harry) Robertson, Mollie Elizabeth (Gary) Simpson, Brittany Briola, Anna Star Simpson, Mason Bradwell (Paige) Simpson, Charles Christopher Simpson, Colby “Hunter” Simpson, Makinsley “Katie” Revels and Anthony Joe “A.J.” Monticone, his great-grandchildren Finley, Haisley and Alice, his brother, James (Ruth) Simpson and his loving cousins. A celebration of Brad’s life will be on Saturday, December 4, 2021 at 3:00 PM at Twin Rivers Baptist Church in Trudie, GA. In lieu of flowers, please donate to The Miracle League of the Okefenokee at 6705 Southside Dr. Blackshear, GA 31516.

Bradwell Conn Simpson, born on September 7, 1944 of Raybon, GA passed away on November 9, 2021 at Memorial Hospital in Jacksonville, FL of natural causes at age 77 surrounded by his loving family. Brad graduated from Glynn Academy in Brunswick,... View Obituary & Service Information

The family of Bradwell Conn Simpson created this Life Tributes page to make it easy to share your memories.

Send flowers to the Simpson family.