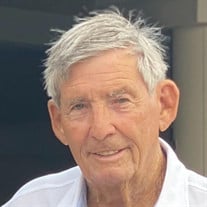 William David Coward, 85, was born on August 20, 1936 in Pensacola, Florida. He grew up in Jacksonville, Florida and was a graduate of Robert E. Lee High School and Florida State University. He was engaged with the Army National Guardsmen as a patriotic but errant member who occasionally had AWOL scrawled next to his name on the roster. Bill was not one for discomfort or confrontations. Jokes came as naturally as breathing, Miller Lite and iced tea were his cocktails of choice, and colorful stories were rapid fire. No table was dull or safe with Bill present. He married his equally gregarious wife, Vicki, on February 1, 1964. They shared 58 years of wonderful camaraderie, love, and commitment. Bill started his career with Travelers Insurance then worked until retirement with Zambetti Steel Products in sales. He drove all over Florida and Georgia. He was the epitome of a people person, which is what made him successful. Customers loved his easygoing nature. His car always held a supply of Moon Pies and Goo Goo Clusters. He was a longstanding member of San Jose Country Club and Ponte Vedra Club, often spending time on the golf course or by the pool with his daughters. Bill loved golf and all of his golfing buddies. Golf trips and travel near and far with Vicki and other couples were frequent. Participating in the Buster Browning Open was a highlight of his calendar; he won the first tournament and donned a green jacket. Bill enjoyed entertaining and watching sports with Vicki when she wasn’t playing bridge. He and youngest daughter Lauren were the best of buddies, frequently enjoying breakfast dates. He went to Athens, Georgia often to spend time with his oldest daughter, Leslie, his son-in-law, John Dorris, and his grandsons, John and Wats. He would regale them with bawdy jokes and have the boys howling with laughter. He and Vicki were renowned for their hospitality and conviviality; their home was always busy and welcoming. Bill never had a bad day. He was funny, happy, nice, and innocuously irreverent. He was down to earth, at which Bill would probably reply, “I am really down to earth now.” Bill was preceded in death by his parents; Virginia and Ceby Coward, his brothers; Donald and Stanley, and his grandson, Oliver Dorris. He is survived by his wife, Victoria Zambetti Coward, his sister, Virginia Coward, his daughters; Leslie Coward Dorris (John) and Lauren Watson Coward, his grandsons John and Wats Dorris, and his cousin, William Moody. A memorial mass will be held on Saturday, 29, 11:00 am, at San Jose Catholic Church. Followed by a reception at San Jose Country Club. Donations may be made to The Arc Jacksonville, 1050 N. Davis Street, Jacksonville, FL 32209, 904-355-0155.

William David Coward, 85, was born on August 20, 1936 in Pensacola, Florida. He grew up in Jacksonville, Florida and was a graduate of Robert E. Lee High School and Florida State University. He was engaged with the Army National Guardsmen as... View Obituary & Service Information

The family of Bill Coward created this Life Tributes page to make it easy to share your memories.

Send flowers to the Coward family.