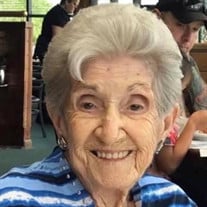 Bernice L. Jackson, 97, of Jacksonville, entered into God’s eternal care in the Community Hospice and Palliative Care Unit at Baptist Medical Center South following a short illness on March 20, 2021. Born on July 22, 1923 in Jacksonville, FL to her parents, George W. and Eva Louise (Bansbach), Bernice graduated from St. Paul’s High School in 1941. During her early years, she was a devoted member of St. Paul’s Catholic Church, then in the mid-1960’s became a parishioner at San Jose Catholic Church, where for many years after retirement, she attended mass daily. She devoted her time to volunteering at church and was very proud of the religious articles store that she ran for numerous years at San Jose. Bernice had fond memories of the years she spent as a member of the Pilot Club of Jacksonville of which she also served in different officer roles over the years. She was a hard-worker and had several jobs over the years, but served the longest for the City of Jacksonville’s Department of Housing and Urban Development until her retirement. Bernice was a very loving, generous, and God fearing woman. Along with dedicating time daily to prayer, she found great joy in spending time with family and friends. She enjoyed shopping, birthday lunches with her siblings, outings with her church friends, and trips to the Shrine in St. Augustine. Bernice is survived by her granddaughter Rachael and her husband, Paul Sordillo of Hull, MA; her grandson, Mark and his wife Melissa of Naples, FL; her brother, George and his wife Norma of Jacksonville; her sister, Antoinette Sheridan of Jacksonville; seven great-grandchildren: Nathan, Jackson, Conner, and Tyler Sordillo; Kaitlyn (Hall), Lauryn and Jace Jackson; and many nieces and nephews who affectionately referred to her as Aunt B. She is preceded in death by her parents; her beloved son, John; and her sister, Dorothy Ready. A memorial mass will be held for Bernice on Monday, March 29, 2021 at San Jose Catholic Church at 10am. Following the mass, her ashes will be interred in a columbarium outside the church. The family kindly asks that in lieu of flowers, donations be made in Bernice’s name to San Jose Catholic Church at 3619 Toledo Rd. Jacksonville, FL 32217.

The family of Bernice L. Jackson created this Life Tributes page to make it easy to share your memories.

Send flowers to the Jackson family.