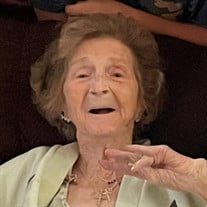 Bennie Jean Stichweh 85 of Orange Park, Florida, passed away from earth to heaven on June 9, 2022. Bennie was born on March 27, 1937 in Henderson, Tennessee to Elbert and Lessie (Dunn) Young. Bennie is preceded in death by her husband of 64... View Obituary & Service Information

The family of Bennie Jean Stichweh created this Life Tributes page to make it easy to share your memories.

Send flowers to the Stichweh family.