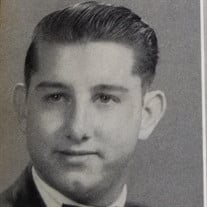 CAMPBELL - Arlin Richard, native of Jacksonville, dedicated Boy Scout, builder, and patriot. He is survived by Carol Campbell and their three loving sons. Born of Ruby Marie Thompson and Tyree Lucky Campbell who preceded him in death along with his sister Shirley Exum and his grandmother; Maggie Maxie. who raised him. Surviving family includes sons; David A Campbell (Marcie), Daniel M Campbell, Daryl P Campbell (Crystal Kim) and three beloved grand daughters, Rylie O., Lily J., and Lana L. Campbell . Donna Mattison (Gary), James Rutland, and Robert Register (Evelyn) half siblings. Three cousins; Christine, Ronald, and Wayne DeRossett. Richard was a long time member of First Baptist Church, Jacksonville where is had many Christian friends with whom he shared a love for Christ and others. Richard used his passion for construction his dedication to his country through his federal service, to include civil employee, teaching construction provided by the AGC (Association of General Contractors), and soldier. His dedication to his family, his country, and to building a better America was what he lived for. As a native of Jacksonville, both professionally and personally, he added to his community. Through working for his father-in-law, he made Jacksonville’s physical infrastructure stronger. Arlin Richard was know to be “hard but fair” in dealing with everyone, especially when it came to jobs he was associated. He would wanted people to remember him for participation in the building the Kings Bay Naval Base in St. Mary’s, Georgia. Also for being in charge of the Trident Nuclear dry dock. He was very proud of his contribution to an important part of the American arsenal. During his time at the base (1979-1990), he was known to get things done according to the contract. Richard’s sons became what they are today, due to Richard’s insistence of building a strong work ethic, a sense of responsibility, and appreciation of others. He wasn’t a perfect father but did the best he could. One thing that was never short in his house was his love for his children. As a husband to Carol Campbell, he was loving and thoughtful, never forgetting special occasions as birthdays and anniversaries. Richard’s hobbies including viewing old classic movies (Angle and the Bad Man with John Wayne was his favorite), classic cars, and various pop culture collectibles. He also enjoyed collegiate and professional sporting events. He also created plaques of sharks fossilized teeth that he gathered on the Navy Base and in various beaches around Florida. In remembrance of the time at Kings Bay Naval Base, he would gift them to officers and friends. Such was the popularity of these plaques that they became collectible items making there way across the world by the recipients . Richard meant a lot to a lot of people. There are not enough words to describe what he meant to others and his family. We think his High School Year Book said: He maybe short, but what a guy! You’ll see mischief in his eye!

CAMPBELL - Arlin Richard, native of Jacksonville, dedicated Boy Scout, builder, and patriot. He is survived by Carol Campbell and their three loving sons. Born of Ruby Marie Thompson and Tyree Lucky Campbell who preceded him in death along... View Obituary & Service Information

The family of Arlin Richard Campbell created this Life Tributes page to make it easy to share your memories.

Send flowers to the Campbell family.