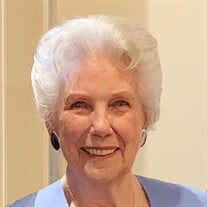 Ann Nelson Wills, born June 8, 1931, entered heaven on Sunday, May 1, 2022. Ann was born in Brownwood, Texas and grew up in Abilene. Her parents were Sadie Scovell Nelson and Chauncey L. Nelson. She met the love of her life, Hal Wills, while attending high school in San Angelo, Texas, which led to a loving marriage of 72 years. While Hal was stationed in Germany, serving in Army Counter-Intelligence, Ann gave birth to their first child, Chauncey Nelson Wills, and later to James Robert Wills III and Sarah Kathleen Wills. After Hal’s return home, he and Ann began to raise their family in San Angelo, Texas. Ann or “Noonie”, (to her grandchildren and great grandchildren) deeply loved her family and was especially fond of babies and dogs. She was devoted to the Episcopal Church and God was her rock. Her faith was unwavering and endured, no matter the challenges that life brought. Ann is remembered for her huge heart and love of education. She spent her career as an exceptional teacher and shaped the minds of countless children of all ages. One of her many accomplishments included ownership of her own k-3 school in Denton, Texas. Ann also taught at Trinity Cathedral School in Little Rock, Arkansas, and Grace Chapel Episcopal in Jacksonville, Florida. Aside from education, her passions included volunteering at All Saints Episcopal Church with the Altar Guild, volunteering with the Meals on Wheels program, and helping folks in need. Ann had a gift for making memories with her family, which includes three children, seven grandchildren, and eleven great-grandchildren. The family, though spread across the U.S., regularly traveled for large family gatherings, just to spend time with Noonie and Pal. There was never any doubt that Ann was the family’s matriarch and beloved by all. Ann was proceeded in death by her parents Chauncey L. and Sadie Scovell Nelson and her sister Mary Alice Hendryx. Her memory lives on with her dearly loved husband, Hal B. Wills of Jacksonville, her cherished children Nelson Wills (Marny), Jim Wills (Cathy), and Sally Vargas (Javier), her grandchildren Marie Weir (Sean), Rob Wills (Natalie), Marshal Wills (Candace), Whitney Cotten (Chris), Leigh Winans (Austin), Juleigh Ann Vargas-Hatala (Alex), and Molly Vargas (David), her eleven adorable great-grandchildren, and her precious dog Sam. Memorial service will be held at All Saints Episcopal Church on Monday, May 23, 2022 at 1:00 p.m. with a reception at the church to follow.

Ann Nelson Wills, born June 8, 1931, entered heaven on Sunday, May 1, 2022. Ann was born in Brownwood, Texas and grew up in Abilene. Her parents were Sadie Scovell Nelson and Chauncey L. Nelson. She met the love of her life, Hal Wills, while... View Obituary & Service Information

The family of Ann Nelson Wills created this Life Tributes page to make it easy to share your memories.

Send flowers to the Wills family.