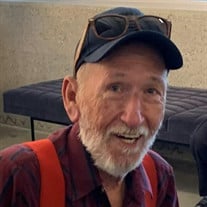 Alvin Leroy Mann passed away August 23, 2021, at the age of 79. He was the son of Frederick Edward Mann, Sr. and Louvenia Almond Magary, stepson of Bernard John Magary, Jr. He was born and raised in Jacksonville, FL. He spent parts of his life in Great Lakes, IL, Oxnard, CA, Virginia Beach, VA and Warminster, PA. He was able to finally come back to his hometown of Jacksonville, FL where he spent the last few decades of his life. He was a proud United States Navy Veteran, retiring after 30 years of service as Senior Chief Petty Officer, OSCS (AW/SW). He served in the Vietnam War and the Gulf War. He would often tell people of his time in the US Navy about the places he saw and the things he was able to do. He especially loved to talk about the time he was able to serve aboard an aircraft carrier with his stepfather, Bernard Magary Jr, who was a Master Chief Petty Officer aboard. During the brief period between the US Navy and truck driving, he worked for NEXRAD, Next Generation Weather Radar, which was a branch of Unisys. Alvin and his software team created it and it is used all over the United States and Europe. After retiring from service, he still yearned for the travel and experiences that he loved while in the US Navy, so he became a truck driver. He would then drive coast to coast as well as to Canada. At every chance he would stop at the attractions on the road and take in the beauty and wonder the United States has to offer. He started out driving with other drivers, or by himself, and was later joined in the travels with his wife, Edna Campbell-Mann, as team drivers. After 15 years of driving together they then retired and started a trucking company of their own. He was a very charismatic, loving man who never viewed anyone as a stranger and made friends everywhere he went. He cared greatly for those around him and were there for them when he was needed. He was always available to lend an ear, if you needed someone to talk to, or a shoulder if you needed someone to lean or cry on. He is survived by his wife, Edna Campbell-Mann, his three children, Kimberly Mann, Jason Mann (Lorena), and Beth Cullens (Clark) and 5 grandchildren, as well as his two stepchildren, Virginia Leggett and Janice Guarini (Michael) and 5 grandchildren. Memorial services are being held Saturday, August 28th at 2 pm at Corey-Kerlin Funeral Home, Cesery Blvd. In lieu of flowers please make a donation to Disabled American Veterans.

Alvin Leroy Mann passed away August 23, 2021, at the age of 79. He was the son of Frederick Edward Mann, Sr. and Louvenia Almond Magary, stepson of Bernard John Magary, Jr. He was born and raised in Jacksonville, FL. He spent parts of his life... View Obituary & Service Information

The family of Alvin Leroy Mann created this Life Tributes page to make it easy to share your memories.

Send flowers to the Mann family.