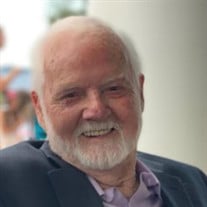 Guyton – Albert “Byron” Guyton III 92, (02/09/1930) of Jacksonville, Florida passed away peacefully on March 1, 2022 surrounded by his daughters. He was born in Jacksonville Florida and spent his years growing up in Fairfield where he attended Andrew Jackson high school and join the United States Navy in 1948 and served until 1952. After his tour of duty he returned to his hometown and began a job with the electrical authority at the generating station until he began his career in the casket business. He began dating the love of his life Barbara June Sullivan and married her on June 26, 1953. Together they shared 65 glorious years as husband and wife. They had four beautiful children Paula Olsen, Albert Byron “Bubba” Guyton IV, Cynthia Druhl, and Jennifer Hall, three sons-in-law, Walter Olsen, Artie Druhl, and Roy Hall. They were given seven wonderful grandchildren Gabrielle Bogart (Kurt), Ashley Olsen (deceased), Lauren Druhl (Sean), Justin Druhl (Kayla), Roy Hall III (Lindsey), Mikayla Holloway (James), and Logan Hall; 6 great grandchildren, Mia Bogart, Gavin Bogart, Savannah Druhl, Easton Hall, James “JJ” Holloway, and Charlotte Holloway (due next month). After embarking on a career in the casket manufacturing business in the 1960’s, he started his own business in 1971, Guyton Casket Company at 2305 Hubbard Street. He served in this business for 45 years, retiring and selling, at the young age of 85. After selling his business, he took on the challenging role of a loving care giver to his wife who suffered from Alzheimer’s Disease. He nurtured, cared, and supported her until her life journey ended in 2019. After her passing, he spent the rest of his time enjoying life with his daughters and their families; Traveling to his favorite vacation spot in Sylvia, North Carolina and his ancestors home town of Wilmington, North Carolina. His greatest enjoyment was his great grandchildren and watching them grow and the milestones that they reached. We wish he could have met his last two great grandchildren, Easton Lee (born March 2, 2022) and Charlotte June (due in April). He is preceded in death by his parents, Albert Byron Guyton Jr and Edna Lee Guyton, wife Barbara, his son Bubba, and grand daughter Ashley Olsen, seven sisters, Martha, Mary, Virginia, Shirley, Blanche, Doris, and Joan. He leaves behind one brother in law, Jimmy Sullivan, many nieces, nephews, and wonderful friends. Our Dad will always be in our hearts and minds. We are lost and heartbroken without our #1 Dad! We will love you, we love you, we love you! A Funeral Service will be held on Monday, March 7, 2022 at 11:00 a.m. at Corey-Kerlin Funeral Home, 940 Cesery Blvd., Jacksonville, FL 32211. The family will receive friends one hour prior to the service from 10 am to 11 am. Burial will follow the service at Riverside Memorial Park, 7242 Normandy Blvd. Jacksonville, FL 32205

The family of Albert "Byron" Guyton, III created this Life Tributes page to make it easy to share your memories.

Send flowers to the Guyton, family.