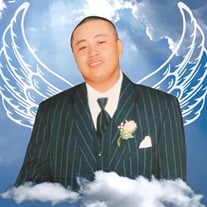 Akkadeth “Akky” Vorasan (41) passed away unexpectedly on Sunday, November 14, 2021 in Jacksonville, Florida. “Akky” was born in French Camp, California to Sack Vorasan & Chanthy McFaddin on July 18, 1980. He grew up in Stockton, California and moved to Jacksonville, Florida where he spent majority of his adulthood. He graduated from Lecanto High School and later he completed his certification at Tulsa Welding School. He then proudly pursued his career as a welder. He is preceded in death by his grandparents: Py & Phao Srisouvanh; and father- Sack Vorasan. “Akky” is survived by his mother- Chanthy McFaddin; children- his daughter: Vyla and son: Juno Vorasan; his siblings; Somsack, Jimmy & Christina Vorasan; as well as his countless family members. He found great happiness in life through simple pleasures – spending quality time with friends & family, sitting on the porch listening to Tupac, joking and storytelling. He enjoyed making everyone smile & laugh even if the joke was on him. He was a selfless person – he had a generous & giving heart. The love he had for everyone was never compromised despite his challenging journey in life. He never knew a stranger and would always make you feel welcomed. “Akky” always said his children were his greatest achievement. He will always be remembered by his infectious smile and laughter that touched so many; his generosity; genuine love for everyone, his witty jokes & last but not least his narrative ofcountless stories with his exclusive sound effects. We will all miss him more than words can say. We take comfort in knowing that “Akky” is now at peace and surrounded by light with our late loved ones in heaven. The family of Akky wishes to extend our sincere gratitude and support during this difficult & tragic time.

The family of Akkadeth "Akky" Vorasan created this Life Tributes page to make it easy to share your memories.

Send flowers to the Vorasan family.