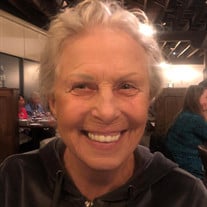 Aggie Brown was born in Dearborn, MI, to Adolf and Mary (Kranz) Lietz. She was the 7th of 8th children in a steelworker family. She attended St. Alphonsus High School, where she served as the Senior Class Vice President and was Homecoming Queen, graduating in 1958. After high school, a passion for service led her to join the Dominican Order; she obtained a bachelor's degree in English from Siena Heights College and became a schoolteacher. When she left the convent, she continued to work as a schoolteacher in Detroit, MI, then met and married John Crandall, the father of her only child, Marie Crandall. After their divorce, Aggie began to work in substance abuse counseling and education. She was offered a position to start the Employee Assistance Program at St. Joseph's Mercy Hospital in Ypsilanti, MI, and the hospital paid for her to get a Master's in Science, and she became a Certified Social Worker. This led to years of meaningful work as an EAP leader, and later as a family and individual counselor in private practice. By 1982, Aggie had married her longtime friend and partner, Bill Brown. They moved to Luther, MI. She loved living in the woods, being near the Little Manistee River, and gardening. In the early 1990s, Aggie became fascinated with gemology and earned a certificate from the Gemological Institute of America. She traded gemstones, opened a jewelry shop, and designed memorable pieces of jewelry during that time. Aggie and Bill had divorced, and when she retired in 2005, she moved to Deerfield Beach, FL, to a lovely casita, where she planted fruit trees, volunteered with Feline Friends cat shelter, cared for her indoor and outdoor kitties, and walked by the ocean every day. Due to health problems, Aggie moved to Jacksonville, FL, to live with her daughter for the last few years of her life. Aggie was deeply political and spiritual. She was a staunch feminist, passionate about social justice, the environment, and animal welfare. She was a vegan foodie and talented cook. She was brilliant, creative, and insightful, with a wicked sense of humor; time spent with her was full of laughter and love. She was also a world traveler; she traveled extensively on 4 continents, including trips to the Galapagos, safari in Kenya and Tanzania, Thailand, Costa Rica, and most of the countries in Western Europe. She strongly agreed with Mark Twain that "travel is fatal to prejudice, bigotry, and narrow-mindedness." She was an extraordinary, beautiful person whose light made everyone around her shine a little brighter. Aggie was preceded in death by her parents and her siblings Dolores Powell, Eddie Lietz, Jerry Lietz, Theresa Lietz (Sister Margaret Jerome), and Evelyn Smith. She is survived by her sisters Mary Lietz (Sister Karen) and Margaret Leslie, and her adoring daughter, Marie Crandall. An online memorial service will be held on June 16, 2022. Invitations with the link will be sent via email and Facebook. In lieu of gifts, please send donations in honor of Aggie Brown to Best Friends Animal Sanctuary: https://support.bestfriends.org/site/SPageServer/?pagename=honors_gift_api&_ga=2.86915224.1672917645.1654949142-568229152.1654949142&_gac=1.50330964.1654949142.Cj0KCQjw-pCVBhCFARIsAGMxhAeFZAIe7rxS53ri-cisjBGJvMHM2nAkxcorTBEAnWComlSh1o2DsZQaAlZZEALw_wcB

Aggie Brown was born in Dearborn, MI, to Adolf and Mary (Kranz) Lietz. She was the 7th of 8th children in a steelworker family. She attended St. Alphonsus High School, where she served as the Senior Class Vice President and was Homecoming... View Obituary & Service Information

The family of Aggie Brown created this Life Tributes page to make it easy to share your memories.

Aggie Brown was born in Dearborn, MI, to Adolf and Mary (Kranz)...

Send flowers to the Brown family.