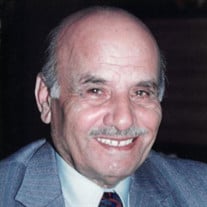 Abdo Nagib El-Bahri, or “Abu-George”, as he liked to be called, of Jacksonville, Florida, passed away on February 8, 2022 at 98 years old, surrounded by family. He was born to Nagib El Bahri and Salime Kfoury on August 20, 1923, in Sarba, Jounieh, Lebanon. He is preceded in death by his sisters Meriam Beaino, Tamar Khalifeh, Rashideh Kozaily, Badia Assal, brother Georges, and daughters Salime Abikalil, and Amal Bahri. He is survived by his beloved wife of 78 years, Chafica Chilazi, his children Georges (Lori), Nabil (Soha), Sami (Micheline), Fady (Melia), Gaby (Joyce), Nawal Abi Nasr, Lilliane Helt (Robert), Andre (Carla), twenty-two grandchildren, Rana, George F. (Jessica), Lara (Max), Joelle, Nathalie, Danielle (Chad), George N. (Carla), Mark, Stephanie (Alexi), Andre G., Lina, Jessica, Carol, Sandy, Michelle, Christina, Grace, Meriam (Felix), Paul, Stephanie M., George G., Gabriella, five great grandchildren, George C., Michael, Sophia, Ava, Charlie, and many cousins, nieces and nephews. Abdo dedicated his life to the service of others – personally and professionally. Initially, he started his career working in construction for his father. Later, for more than 25 years, he was a union representative for the workers of the Electrical and Transportation Company in Beirut. Lebanon had gained its independence from France but workers’ basic rights and benefits did not exist. Abdo was instrumental in organizing several labor strikes, resulting in the government enacting protections for vital benefits such as social security, medical and dental coverage, and paid sick leave. As an advocate, he also fought for employees’ rights to fair and transparent performance reviews. He met his wife Chafica in Beirut and they married at twenty years young. Together, they built their house by hand, one room and one baby at a time. As one can imagine, the load of raising ten children was enormous. He and his wife worked tirelessly to give each child the love and care they needed, no matter the cost. And throughout it all, he never complained. Abdo went out of his way to care for people in his community. During Lebanon’s Civil war, Abdo transformed one of the rooms in his house into a bomb shelter. He gave a key to his neighbors so they could seek refuge in times of trouble. Since his young age, Abdo was an active member of the Maronite Catholic Church. In elementary school, he learned the chants of the Maronite mass, and helped with the mass service with his beautiful singing voice. Until recently you could find Abdo attending mass dressed-up in a 3-piece suit, enjoying the Maronite chants he so loved. A few years ago, he and his wife were proud to receive the Silver Massabki Award for outstanding service to the Maronite Church community. Until his early nineties, Abdo was an avid biker. Whether he ventured out to pick up groceries for one of his wife’s feasts or was simply enjoying the weather, Abdo made friends along the way. All around the neighborhood, everyone smiled and waved as Abdo passed by on his bike. His favorite rides, however, were the ones he took with his grandchildren. Retiring in Jacksonville alongside his children, Abdo stayed busy working on his greatest achievement – raising grandchildren. It may not come as a surprise, but to Abdo, the more kids, the better. He was both a disciplinary and a pushover. He was always ready with a lesson or a story; his memory and his wit stayed sharp in all his 98 years. He was steadfast about many things, but most notably – the importance of education, the bond of family, and the value of a good joke. Abdo was a loving husband, father, grandfather, and great-grandfather. He was also a man of strong will and profound wisdom. He lived a selfless life and will be missed by all. There will be a private family Memorial service officiated by Bishop Gregory Mansoor and Father Raymond Khallouf on Monday, February 14, 2022 at 11:00 AM at St. Maron’s Catholic Church, Jacksonville, FL. Donations can be made to St. Maron’s Catholic Church, 7032 Bowden Road, Jacksonville, FL 32216.

The family of Abdo Nagib El-Bahri created this Life Tributes page to make it easy to share your memories.

Send flowers to the El-Bahri family.